The Korean National Police Agency (KNPA) is pushing for the implementation of conditional driver’s licenses for the elderly by 2025, Yonhap News reports. How they’ll determine who gets to keep their licenses will be via virtual reality. The Next Web reports: As of Monday, a three-year research project has been introduced, which will employ VR tech to assess whether drivers aged 65 years and older can remain behind the wheel. The program’s total budget is expected to reach approximately $3 million (3.6 billion won). Contrary to other countries around the word, South Korea has no strict regulations regarding the driving license of seniors, unless they test positive for dementia. Currently, two measures apply: the three-year license renewal period for those aged 75 years and older, and the voluntary return of the driver’s license for people over 65 years-old. However, the KNPA is still raising concerns over the number of accidents attributed to senior drivers, as well as the continuous aging of the country’s population.

The VR test will asses driving, cognitive, and memory skills using a VR headset, close to how virtual reality technology is used in dementia clinics to check the brain functions of older people. While the specifics are yet to be disclosed, a similar academic research by independent scientists has run an experiment, testing driving performance evaluation based on virtual reality tech. The researchers conducted driving simulator experiments to measure various driving behaviors under many different driving conditions, in order to examine the participants’ visual acuity. The virtual simulations included two scenarios: daytime and nighttime highway driving. In both cases, three unexpected incidents were created to test the drivers’ performance […].

Source: Slashdot – South Korea Will Use VR To Determine If the Elderly Can Keep Driving 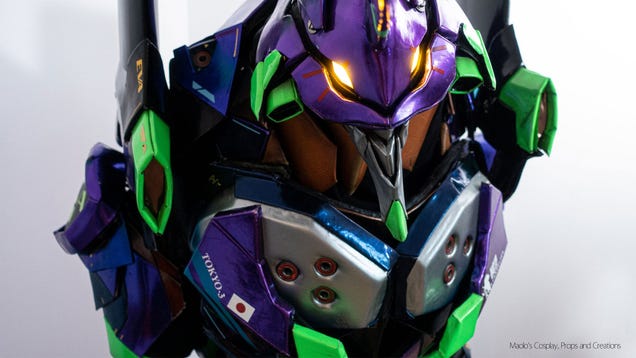 I’ve lost count of the amount of Neon Genesis Evangelion cosplay I’ve posted on this site over the last 10 years, but pretty much all of it has been focused on the anime’s characters, especially Rei and Asuka. It’s enormous mechs are a somewhat trickier proposition.

Scientists on Monday announced that they’d optimized a way of getting mobile clusters of cells to organize other cells into smaller clusters that, under the right conditions, could be mobile themselves. The researchers call this process “kinematic self-replication,” although that’s not entirely right—the copies need help from humans to start moving on their own, are smaller than the originals, and the copying process grinds to a halt after just a couple of cycles.

This is a case when something genuinely interesting is going on, but both the scientists and some of the coverage of the developments are promoting it as far more than it actually is. So, let’s take a look at what’s really been done.

Source: Ars Technica – Interesting research, but no, we don’t have living, reproducing robots

Among the reasons behind the establishment of the PHP Foundation is that one of the key contributors, Nikita Popov, has decided to switch his focus away from PHP to LLVM. 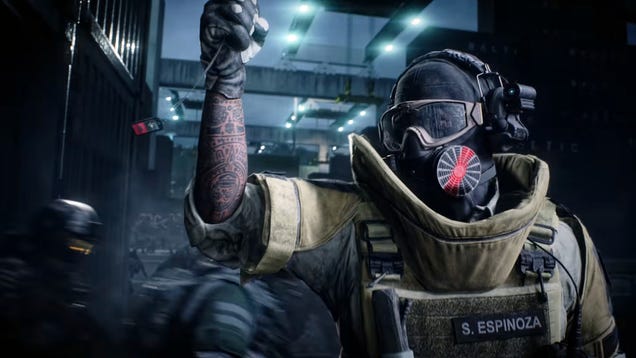 It’s time to reset the clock on days without a glitch being discovered in Battlefield 2042. The latest glitch found in the first-person shooter allows players to use the in-game menus to cancel the effects of smoke grenades.

An anonymous reader quotes a report from Ars Technica: The CEOs of 13 large European telecom companies today called on tech giants — presumably including Netflix and other big US companies — to pay for a portion of the Internet service providers’ network upgrade costs. In a “joint CEO statement,” the European telcos described their proposal as a “renewed effort to rebalance the relationship between global technology giants and the European digital ecosystem.” The letter makes an argument similar to one that AT&T and other US-based ISPs have made at times over the past 15 years, that tech companies delivering content over the Internet get a “free” ride and should subsidize the cost of building last-mile networks that connect homes to broadband access. These arguments generally don’t mention the fact that tech giants already pay for their own Internet bandwidth costs and that Netflix and others have built their own content-delivery networks to help deliver the traffic that home-Internet customers choose to receive.

Today’s letter from European ISPs was signed by the CEOs of A1 Telekom Austria Group, Vivacom, Proximus Group, Telenor Group, KPN, Altice Portugal, Deutsche Telekom, BT Group, Telia Company, Telefonica, Vodafone Group, Orange Group, and Swisscom. They wrote: “Large and increasing part of network traffic is generated and monetized by big tech platforms, but it requires continuous, intensive network investment and planning by the telecommunications sector. This model — which enables EU citizens to enjoy the fruits of the digital transformation — can only be sustainable if such big tech platforms also contribute fairly to network costs.” The European telcos didn’t mention any specific tech giants, but Reuters wrote today that “US-listed giants such as Netflix and Facebook are companies they have in mind.” The letter also discusses other regulatory topics related to fiber and mobile broadband, saying that “regulation must fully reflect market realities… Namely, that telecom operators compete face-to-face with services by big tech.”

Clonezilla Live 2.8 is here as a modest update that bumps the kernel from Linux 5.10 LTS to the newer Linux 5.14 series, which is no longer supported upstream.

Linux kernel 5.14.6 is included in Clonezilla Live 2.8 mainly to provide users with better hardware support, but there won’t be any further updates released to this kernel branch, at least not upstream. Learn about some of the other Clonezilla Live updates here.

“This variant is a cause for concern, not a cause for panic,” Biden said in remarks delivered from the White House Monday. He touted the power of current vaccines and America’s scientific prowess in being able to address the potential threat. “We’ll fight this variant with scientific and knowledgeable actions and speed—not chaos and confusion.”

Flanking Biden during the remarks was top infectious disease expert Anthony Fauci. Earlier today, Biden huddled with Dr. Fauci and the rest of the White House COVID-19 Response Team to discuss the threat of omicron. Biden reported that, so far, Fauci and the team believe that current vaccines will “provide at least some protection” against omicron—particularly against severe disease—and that booster doses “strengthen that protection significantly.” 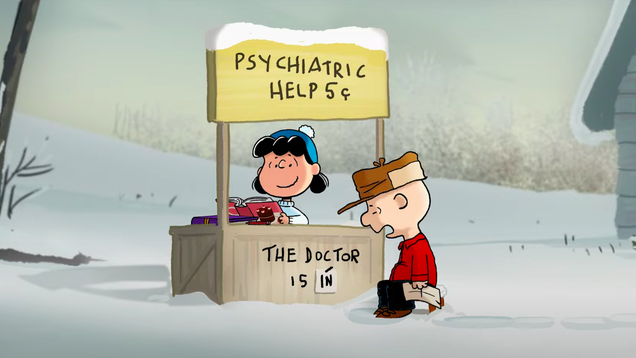 Heartwarming as Peanuts stories tend to be, Apple TV+’s upcoming For Auld Lang Syne animated special tells a story about just how stressful and emotionally exhausting the holiday season often ends up being. Though Lucy Van Pelt prides herself on doling out mental health advice to her friends, Auld Lang Syne finds her…

Source: Gizmodo – Charlie Brown and the Peanuts Gang Are on a Mission in Their New Holiday Special

Linux booting is a complex process as compared to booting processes in any other distribution. The Linux Kernel accepts a lot of parameters at booting, in the command-line. This command-line boot time parameter passes several kinds of information to Linux Kernel at System Startup. 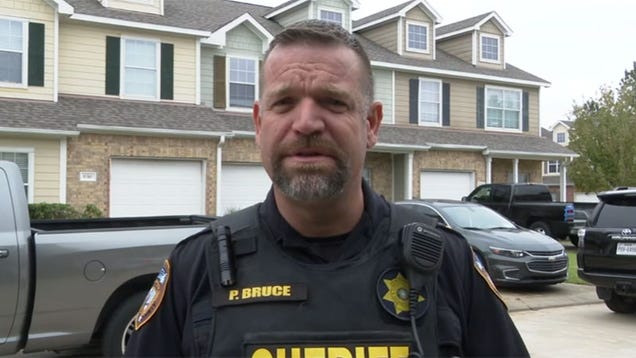 We’re a year after release and the PS5 is still hard to find, which means the consoles already out there are a hot commodity. Sadly this has led to a heated resale culture around the machine, and even sadder in this case, it has resulted in a 19 year-old being shot trying to sell one.

Source: Kotaku – Man Shot While Trying To Sell His PlayStation 5

As wafer costs increase, so are the costs of GPUs. According to a post on the Board Forums, AMD says it’s increasing the price of its RX 6000 series GPUs by 10 percent across the board. ExtremeTech reports: This pricing change will apparently occur in the next shipment of GPUs to its partners, which will apparently drive up the price of these GPUs by $20 to $40 USD. This news arrives just in time for the holiday shopping season, when demand for GPUs is expected to increase even more, as if that is even possible.

According to a translation of the board posting, AMD is citing TSMC wafer costs as the reason for the change, and as we reported earlier, sub-16nm prices, including 12nm, 7nm, and 5nm, are said to have increased roughly 10 percent, while TSMC’s older nodes have gone up by as much as 20 percent. AMD seems to be passing this price increase along to its partners, who in turn are passing it along to us, the customer, or the scalper, as it were. Then the scalper passes it along to us, the gamers. Although, as Videocardz points out AMD also produces its CPUs at TSMC and there hasn’t been a similar across-the-board increase, which is curious.

CD Projekt Red is “on track” to release the PlayStation 5 and Xbox Series X/S versions of Cyberpunk 2077 in the first quarter of 2022, the studio’s parent company announced on Monday. CDPR had initially planned to release the update in late 2021 until it announced a delay to early 2022 in October.

Next-gen update for Cyberpunk 2077 will be free for anyone who bought the game on the old-gen consoles.

CD Projekt also confirmed anyone who purchased the game on either PlayStation 4 or Xbox One will receive the next-gen update for free. Since the game is currently playable on the current generation systems through backward compatibility, everyone who owns the game on a console will get the upgrade for free. If you don’t already have Cyberpunk 2077, you can buy it while it’s currently 50 percent off on the PlayStation and Microsoft Stores and get the game at a discount before the updated version comes out next year.

Source: Engadget – ‘Cyberpunk 2077’ next-gen upgrade will be free for PS4 and Xbox One owners

Originally known as Ethereal, Wireshark has developed a reputation as one of the most reliable network protocol analyzers available out there. Recently, Wireshark has released a new version of its free and open-source packet analyzer, Wireshark 3.6.0, with all new features and protocols.

Croc is an open-source CLI-based tool that allows to securely transfer files between systems. In this tutorial, I will show you how to install Croc on Ubuntu 20.04 and how to transfer files and folders securely using Croc. 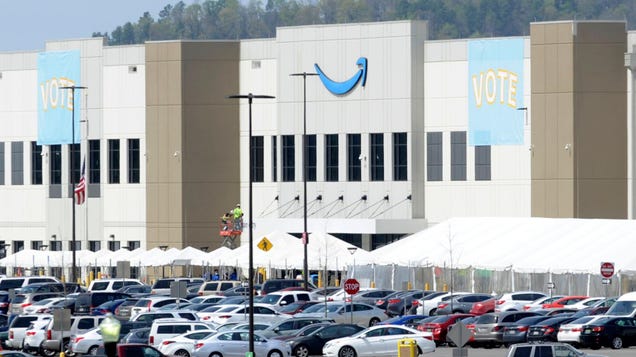 Bessemer, Alabama warehouse workers will get a second shot at a union election, the National Labor Relations Board has decided. It found that Amazon shot itself in the foot by interfering with the election, even beyond its considerable leverage to influence workers.

Source: Gizmodo – Amazon’s Alabama Workers Are Getting a Second Chance to Unionize

YouTuber James Steven “MrBeast” Donaldson’s Squid Game recreation is so popular on the video-sharing platform that its view count almost mirrors that of the hit Korean survival drama that inspired it. While it’s easy to get caught up in how accurate the non-lethal set was, it’s even easier to miss some of the…

As more and more automakers turned their attention to EVs, one-time leader Nissan finds itself playing a game of catch-up. In an attempt to make up for lost time, today it announced that it will invest $17.6 billion over the next five years “to accelerate the electrification of its vehicle lineup and rate of technology innovation.”

The plan, called “Nissan Ambition 2030,” is notable for its lack of ambition.

The company says it will introduce 15 new EVs, though it gave itself a generous deadline of 2030. It also said that, by the end of the decade, 50 percent of Nissan and Infiniti sales will be “electrified,” which is industry-speak for adding electric motors, not necessarily supplanting internal combustion engines. Much of Nissan’s strategy relies on series hybrids, where a range-extending gas engine will recharge a small battery. It’s a strategy that looks good on paper but has largely been abandoned by other automakers either because of mediocre sales (Chevy Volt) or looming government regulations.