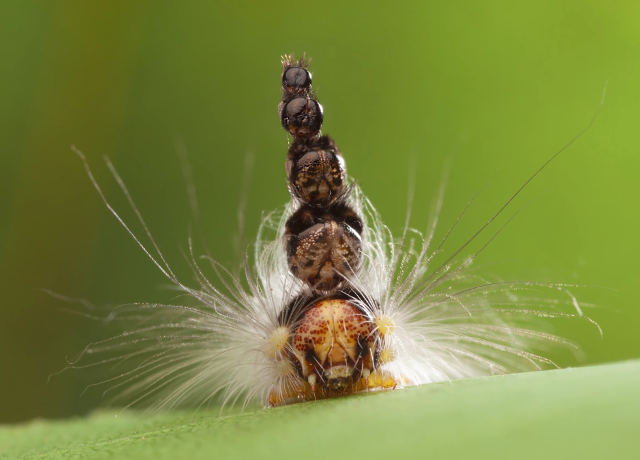 In it may be time for another Mother Nature intervention news, this is a short video from scientist Steve Mould highlighting the life of the the gum-leaf skeletoniser (Uraba lugens), a moth that while in caterpillar form wears all of its previously shed exoskeletal heads in a stack on its current head. Per Wikipedia while I crack open a Friday brunch beer:

Uraba lugens is nicknamed the mad hatterpillar because of its distinctive exoskeletal feature. Every time it sheds the head portion of its exoskeleton, the exoskeleton stays attached to its body. Over time, developing through its life span, the head grows bigger and sheds increasingly larger exoskeleton shells, which build upon each other.

Crazy, right? “Totally nuts.” Mother Nature is a TRIP. Like how does she even come up with this stuff — watching horror movies? You know she actually invited me over for movie night a couple weekends ago but I declined because I figured she was just gonna play the popcorn trick on me again. “Wait — again?” I’m not sure what I touched the first four times, but it wasn’t unpopped kernels.

Keep going for the video.

Source: Geekologie – The Mat Hatterpillar, A Caterpillar That Wears Its Previously Shed Heads Like A Stack Of Hats